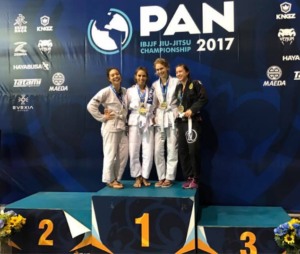 When I first started training BJJ 12 years ago, I wanted to quit. I think most people do. They never tell you that. Some are ashamed of that, but the truth is almost everyone is tempted with that thought. Jiu-jitsu is not easy and when you see how far you have to go to get a black belt, you want to quit. Heck, even a blue belt is a hard accomplishment.

Last month, my student Mariah Bragg entered the adult division of the 2017 Pan American Brazilian Jiu-Jitsu tournament. This is one of the biggest and most competitive tournaments in world. 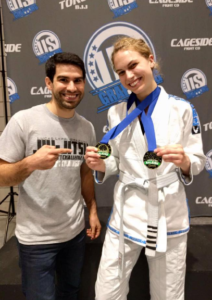 Let’s rewind a year ago. Mariah walked into the mat room unaware of what jiu-jitsu was. she seemed determined and that’s all she really needed. She tried a tournament and did well. she earned second place. But then she challenged herself and competed at the 2016 IBJJF Charlotte Open. She lost in her first round. I am more than sure she was tempted with wanting to quit. But she went back on the following Monday, grabbed her note pad, and dove deep into her BJJ thinking palace. The results: well she trained and drilled everyday for 6 months.

She entered her next tournament and submitted all the girls in one division and won the other. She double golded in the famous US grappling tournament. Then, she got bronze in the Pan Ams. Her match to get to the semi-finals was close. In fact she was losing 3-0. Then, she avoided side control and executed a sweep which ended in a full mount. She ended up winning 6-3. This was all in the last 15 seconds by the way.
It was all the Mental practice of not giving up that taught her to find that will power and come from behind. She lost in the semi-final 2-0 to the girl who won the division. We are so proud of her because of her willingness to always fight and learn.

Here are three things we can all learn from Mariah as we train to get better tomorrow: 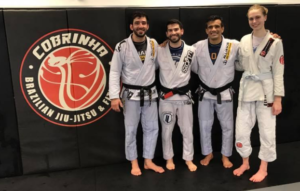 ​So there. Simple, but not easy. Here’s the great part. This isn’t limited to just Jiu-Jitsu. It’s a blue print to success in the real world.

Hope this helps. If you are interested in asking me a question I can answer, please contact Team Casarez BJJ today.