Back to Back Tournaments

This past weekend was a busy one! The team competed at two local back to back tournaments, one on Saturday and the other on Sunday. In total, 12 students competed this weekend.

On Saturday, six students represented Team Casarez at the Newbreed Charlotte tournament in Concord, North Carolina. Newbreed comes to the area approximately 2-4 times a year, and it is a great tournament for students looking to compete for the first time! It is a well organized event, which always makes the day more manageable.

Of the six students competing, it was the first time for three of the students. In total, the team brought home 7 medals – 5 gold and 2 silver.

Trinity, Ellie, Jenn, Megan, Turner, and David all did a great job!

Ellie earned 2nd in the No Gi and Gold in the Gi. In the Gi, she won her match by armbar. She recently placed gold at the Good Fight Tournament, also submitting both of her opponents by armbars.

Jenn competed in No Gi and decisively won her first match, ending the fight in an Americana. She advanced to the finals round, where she lost to a Kimura. This was her first time competing as a blue belt, and she earned 2nd in the division!

Megan competed in the No Gi division as well, and this was her first competition ever. She started off strong, initially winning her first match, but lost in the end due to points. Although she didn’t place, we are proud of her for going out and competing. Jiu Jitsu is a whole family sport for Megan, her husband, and their son, Theo! 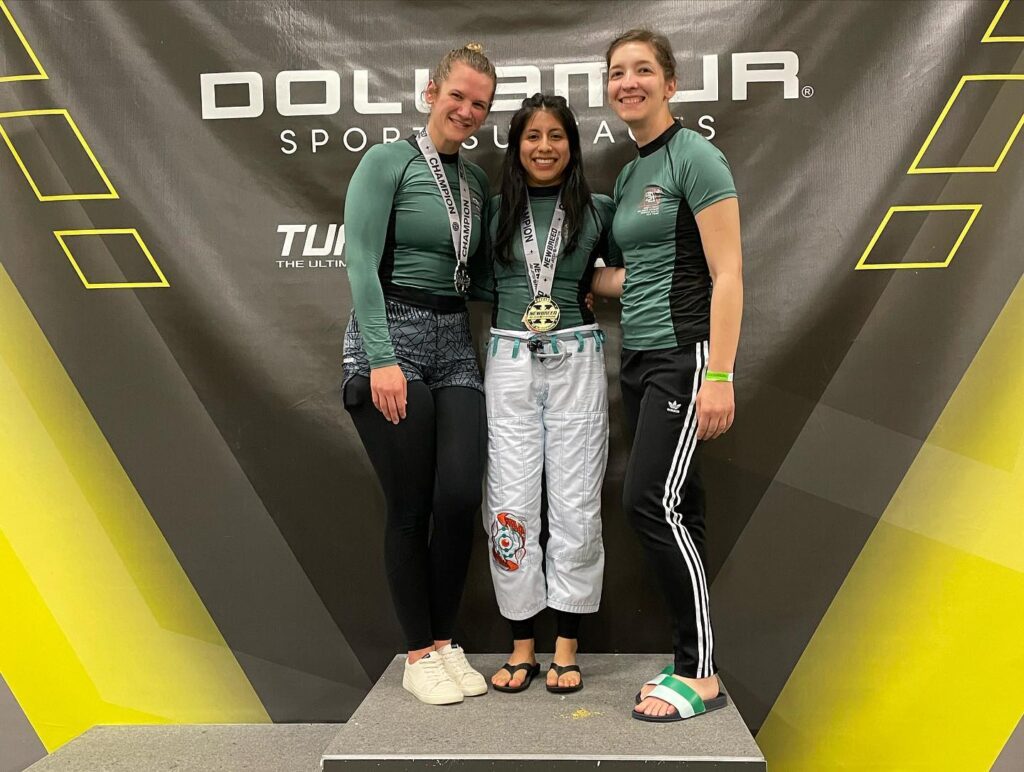 Turner also competed for the first time this past weekend. He showcased a lot of the techniques and concepts that we have been working on in the fundamentals class. He swept his opponent, reversed multiple times, and almost got the back. However, he fell short on points in the end and was eliminated from his division.

David wrapped up the day with his matches, which he won by points after landing some strong takedowns. He earned double gold in his division! 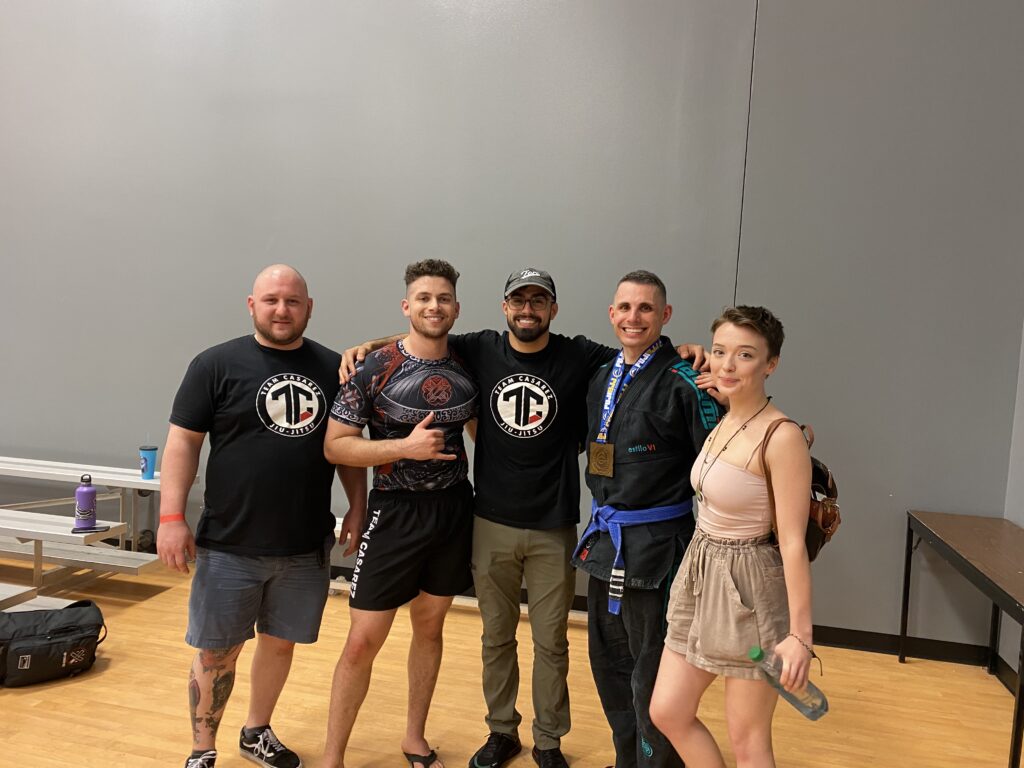 The next day, another round of students competed at the FUJI Raleigh Spring Championship. There were 3 kids, Rowen, Silas, Arthur, and 3 adults, Kevin, Austin, and Mike.

Rowen, Silas, and Arthur began the day early with the kids division. Rowen and Silas had some tough matches, but kept a very strong attitude. This is impressive to see in such young competitors! Arthur won 2 of his matches, and earned

Kevin competed and had some great matches that earned him gold in the Gi. In No Gi, he got third place.

Austin competed in his weight class and lost the first match. He decided to compete in the weight class above him, and ended up winning all of his matches to get gold in the Gi. 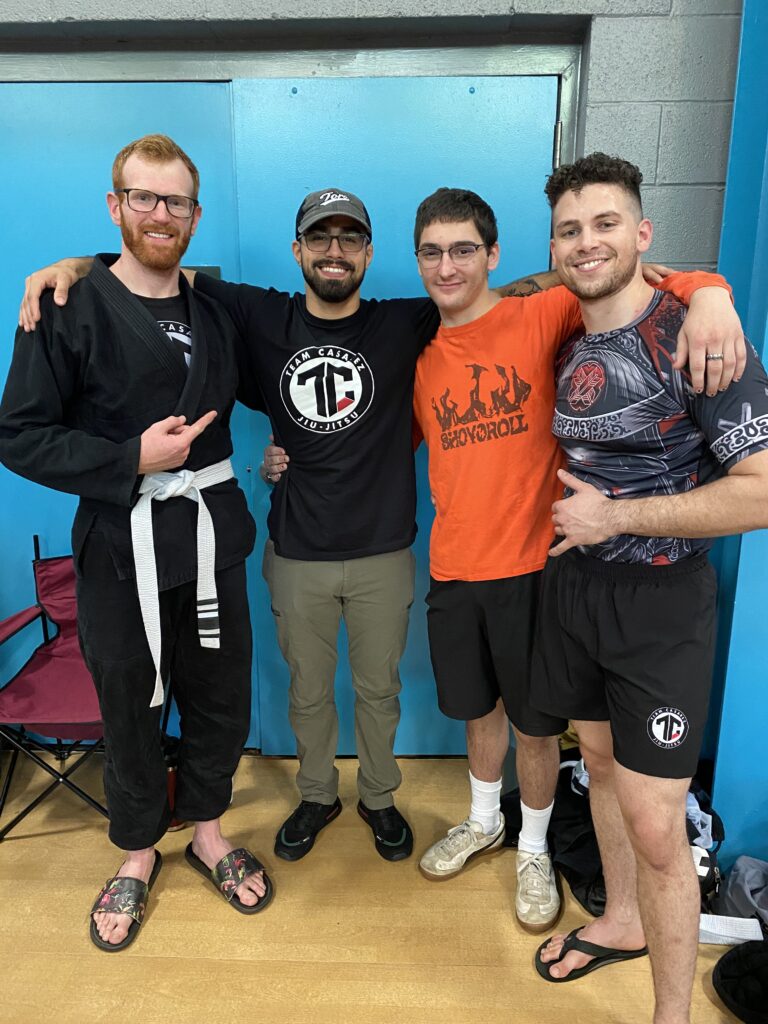 Mike competed in the Gi division for his weight class and won gold. He executed a game plan that the team has been studying for the past couple weeks in class. He got an armbar submission in one of his matches as well.

All twelve of the students who competed this weekend did a great job, and we are very proud of them.

Looking ahead, the next event will be Toro Cup 20 on April 30. We have two competitors that will be fighting. This event will also be livestreamed by FloGrappling.