On the weekend of March 26 and 27, IBJJF hosted the Charleston Open in South Carolina. We took a total of 4 competitors to this tournament, Professor Tony, Ferny, Riya, and Troy. There were also three students from the school who chose to travel to Charleston just to watch and support their teammates, Henry, Devin, and Anna. This was a 5 hour drive, so we especially appreciate their support!

Also, as a part of Alliance, our association was awarded 1st place of all the teams at the tournament! 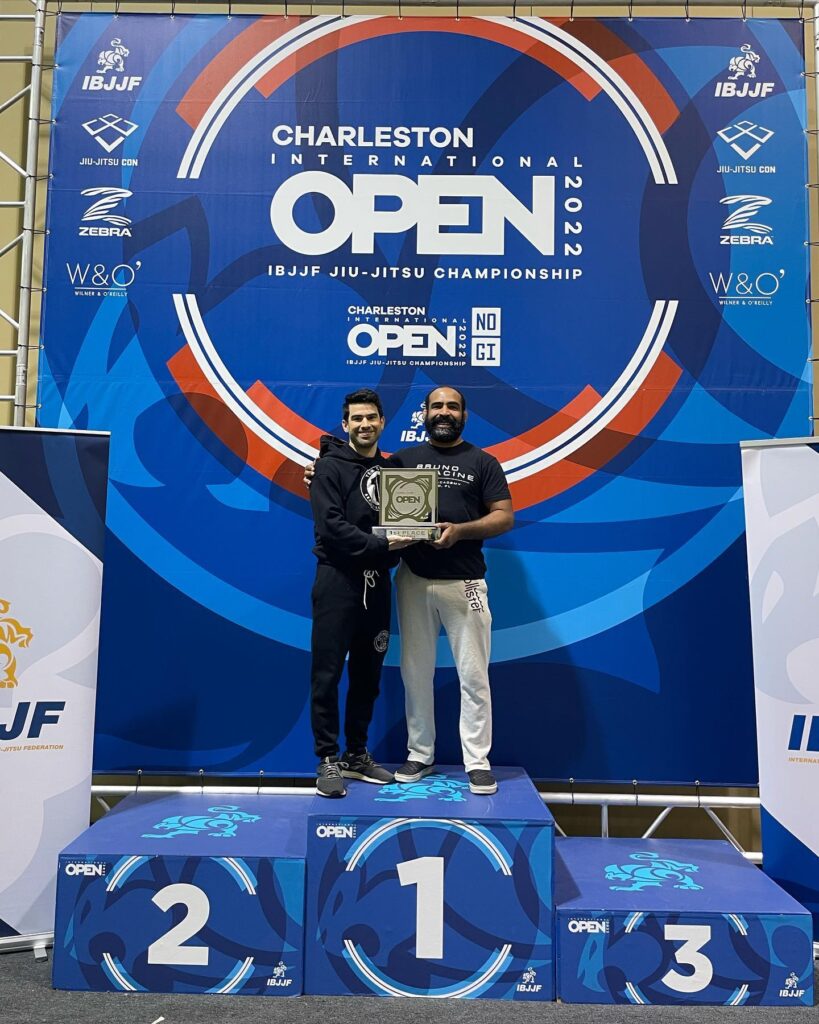 Riya competed in the Juvenile Blue Belt Gi division, and after winning her weight class, she decided to also compete in the open class. She won the open class as well, ultimately bringing home 2 gold medals. She got two submissions, a kimura and an armbar. Riya trains almost everyday in the evening classes, she helps out with the kids classes, and she studies Jiu Jitsu outside of training. She now has her eyes on Pan Ams 2022, where she will compete next week! 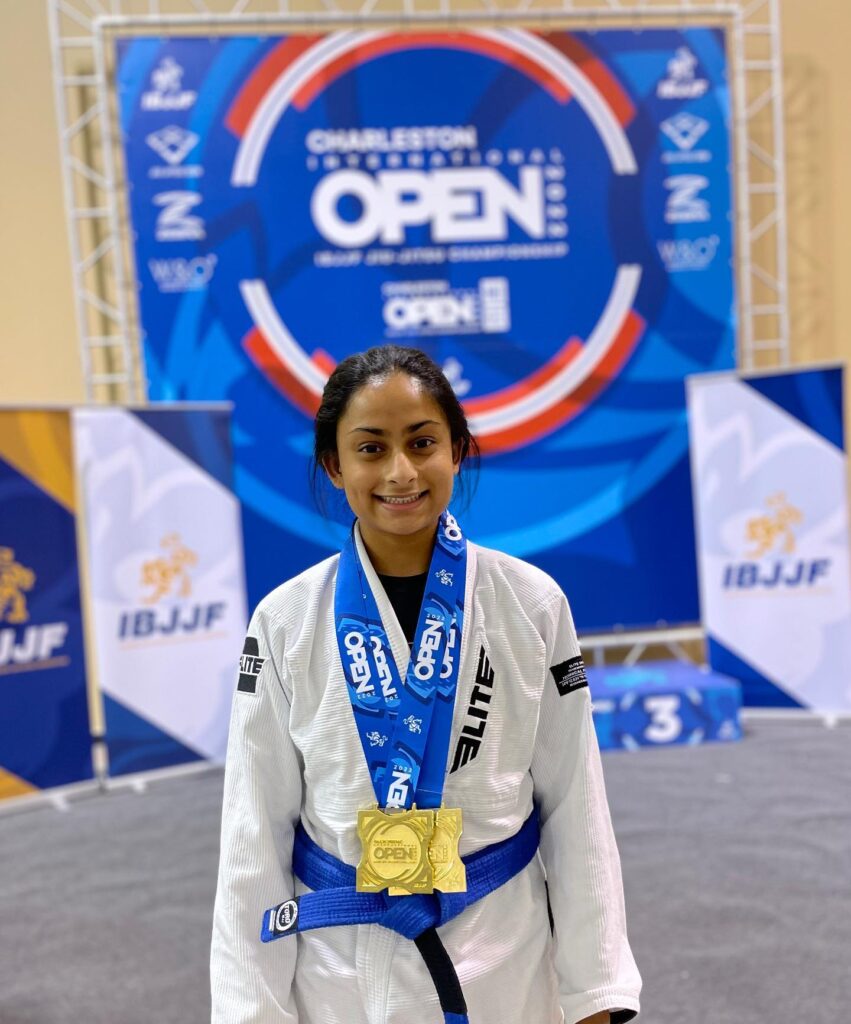 Ferny competed in the Adult Purple belt division against some of the toughest purple belts in the world. This is his 3rd IBJJF as a purple belt, and he competed in both the Gi and No Gi divisions for his weight class. In the Gi division, he was calm and used his pressure to get in good positions. When he was utilizing his guard, he was able to trap his opponents shoulder and secure a triangle and then lock up an arm bar.In the semi finals, he lost to the champion (an Alliance teammate and great friend of the academy) by armbar, but fought hard throughout.In the no-Gi division, he won by 31 points. He didn’t get the submission, but he was hunting for the submission the entire time. He didn’t get scored on at all. In the finals, he was up 2-0 from a sweep he set up. He then got caught by a triangle from the closed guard. Ultimately, Ferny fought his way to 3rd in the Gi Division and 2nd in the No Gi Division.

Troy competed in the Blue Belt Adult Division for the first time, and put on some great performances! In the Gi, he had a tough match against the champion (a member of Alliance and great friend of the academy). In the match, he showed heart and technique, with a very strong passing game in the beginning, but got caught by a bow and arrow in the end. In the no-Gi, his only opponent didn’t make weight. So he automatically won the division. With the hunger for battle, he went into the open class and fought an opponent over 30 pounds heavier. He was able to sweep and score points, but then lost by armbar to his opponent who medaled at the open class division. Troy has a bright and exciting future ahead of him in competition, since he is always positive, hardworking, and composed! 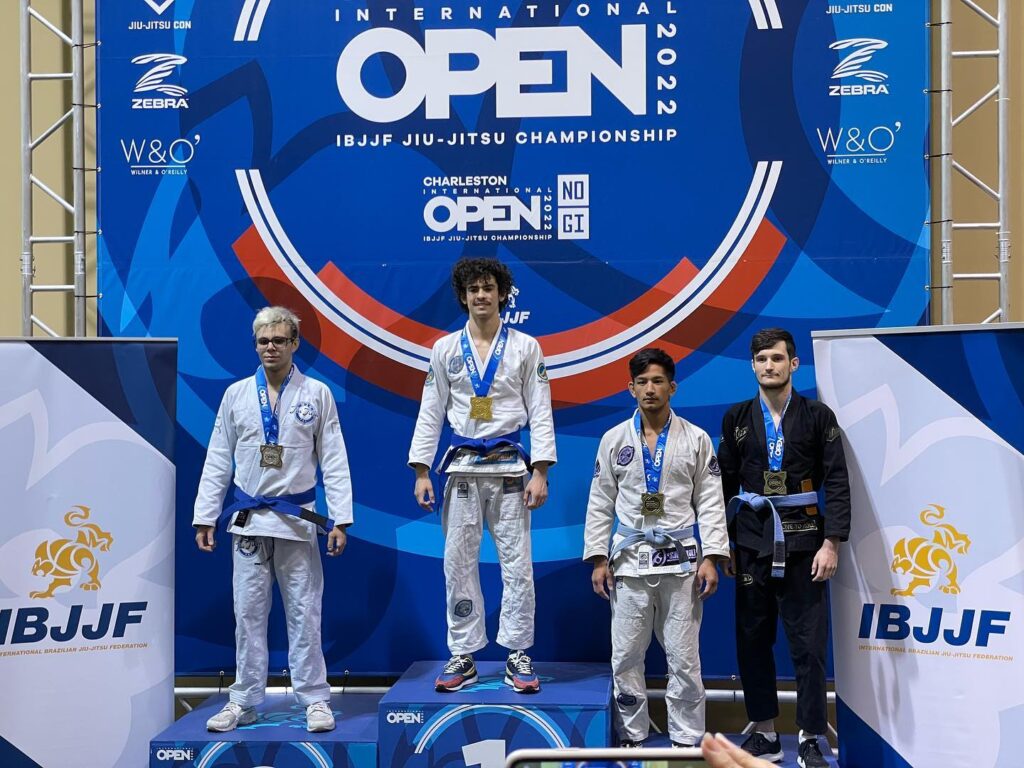 Professor Tony competed in both Gi and No Gi. With eyes on Pan Ams, he wanted to test his cardio in the most fast paced and technical division in the tournament – Adult Black Belt. Although the matches did not go his way, his performances were strong and he showcased techniques he teaches everyday at the school. His cardio was tested, and he took notes on what he wants to improve for the upcoming competitions! There will also be a breakdown of his No Gi matches on the YouTube Channel soon.

Day In The Life

To see an inside look at the tournament, check out this vlog created by one of our students that shows a Day In The Life of competition Jiu Jitsu!