One of the biggest international Jiu Jitsu competitions of the year, IBJJF Pan Ams,  took place in Kissimmee, Florida April 5-10. In years past, Professor Tony Casarez has traveled by himself or with one other student to compete. This year was the first time that Team Casarez sent a team of 5 competitors to the tournament.

Competitors from all over the world come together to compete in this Gi tournament, from white to black belt. Because of this, it is a multi-day competition. Professor Tony, Ferny, and Milo competed on the Friday of the competition. 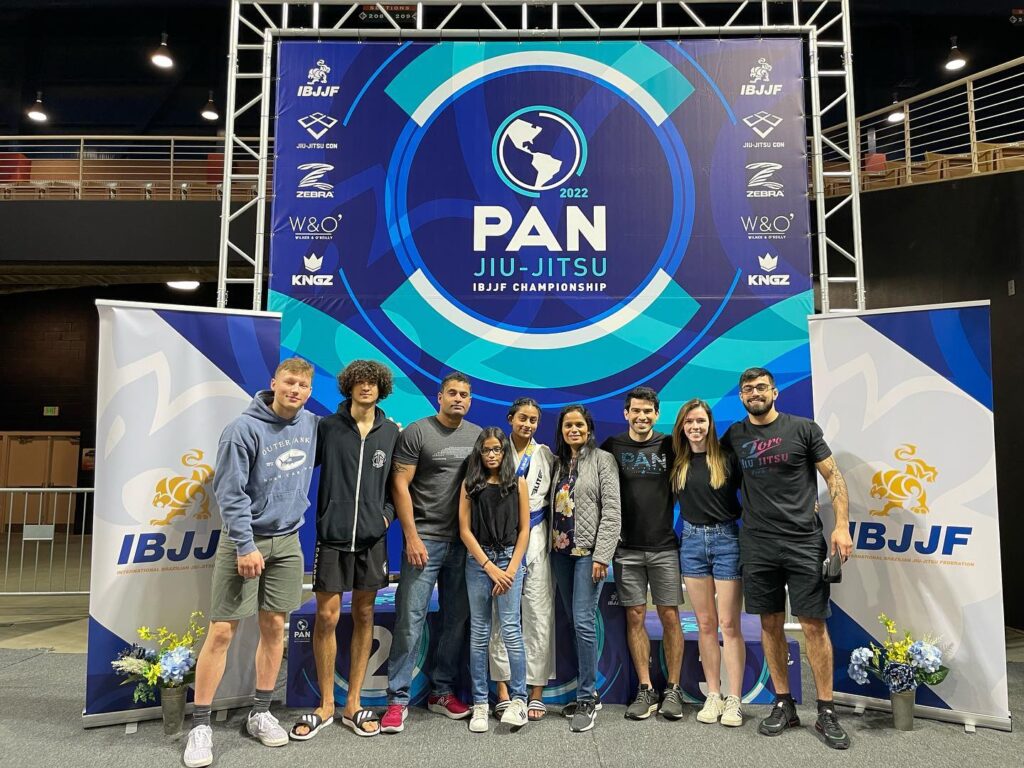 The day started with Ferny, who won his first match 2-0 after scoring a beautiful sweep. In his second match, he didn’t pull guard the way that he had planned to, which threw him off and cost him the match. Since it is such a big tournament, all brackets are single elimination.

The next competitor was Milo. This was his first tournament in a couple months after a knee injury early in the year. Nevertheless, he came out very strong, stuck to the game plan, and won his first two matches by submission. He won by kimura and then rear-naked choke. He advanced to the quarterfinals, where he lost by an armbar.

At the same time, Professor Tony was getting ready to compete on the other side of the mats. This was his third weekend in a row after competing in the IBJJF Charleston and then the ADCC in Las Vegas. For this tournament, he competed in the Masters 2 division. His match was going perfectly according to the game plan, with a clean guard pull and a textbook sweep. He was up 2-0, and in the middle of the match went for a suma gaeshi that was not successful and unfortunately gave up a sweep. The score was tied 2-2, and the ref awarded an advantage to his opponent in the final seconds for the pressure from half guard.

The next day, Riya and Caike took to the mats to compete for the first time at the IBJJF Pan Ams.

Riya competed first, and after scoring double gold at the IBJJF Charleston, she was ranked the #1 seed. She won her first match by points, scoring 10 on her opponent and having 0 scored against her. She passed twice and then was in mount for the rest of the match. She moved on to the finals match, where she fought Mia Funegra of AOJ. A second of hesitation to execute the guard pull game plan cost her the match, and she got 2nd place in the Juvenile Blue Belt division.

Caike closed out the day with his match. He executed the game plan and fought hard, but ultimately lost via points in the last couple seconds of the match.

Road to Gold… Only the Beginning

For Riya, Caike, and Ferny, this was their first IBJJF Pan Ams. In total, 5 competitors represented Team Casarez. This is exciting because it is the most competitors the team has ever brought to Pan Ams. While we did not get the gold medals that we wanted, we are building a competitive team that is driven and determined to return year after year, building on every performance as we go.

We expect the competition team at Team Casarez to continue growing year after year. The more we compete, the more experience we have to learn and grow. Gold medals are always the goal, so we will continue to build and show up again next year.

To get an inside look at the weight cuts, traveling, meal prep, and warm ups that take place in competition, check out the vlog on the YouTube Channel: